The greatest joy of a publicist is “delivery the goods.” By that I mean, learn the story, refine it, tell it, and get someone else enthused enough to also want to discover the essentials and tell it in his or her own words.

This just happened for me with Suisun Valley. Suisun is a delightful California AVA (American Viticultural Area), that’s long been overshadowed by its northwest, Napa neighbor. The simple reason for this (I’m sure there are also more complex ones) was Robert Mondavi; an iconic man, who always was, and always be, a larger than life figure. Mondavi managed to be the best storyteller Napa ever had. This is not to say there weren’t, and aren’t now, highly regarded personalities in that valley and on its hillsides. (Carl Doumani of Quixote is one of them; Delia Viader of Viader Vineyards is another for me.)

Robert’s wine marketing history began as a child in Minnesota, where he constructed fruit boxes for his father Cesare’s business. Cesare would bring grapes from California’s Central Valley back to Minnesota. The family then moved to Modesto, California, once Cesare had made the trip, like so many before him.  Next, the family then moved to Napa, where Cesare ran the Sunny St. Helena Winery. By 1942, Robert convinced his dad – through his mother – to buy Charles Krug Winery.  Bob Mondavi and his brother Peter helped to run Charles Krug. Robert, it turned out, was the best and most passionate storyteller in the family and Valley; consequently, Napa’s had a lot of play for a very long time, eclipsing all other regions as though they never existed. 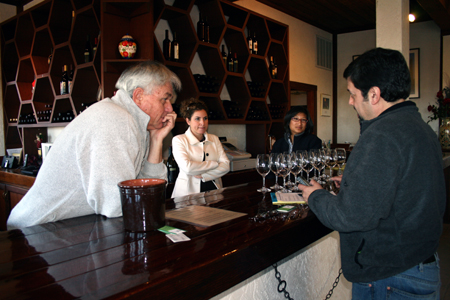 Today, Suisun Valley has their own equivalent, Roger King of King Andrews Vineyards, who sells his wine at the Suisun Valley Wine Cooperative. This – again – is not to say that Suisun doesn’t also have equally passionate people in the wine business, who are simply delighted each day they get themselves out of beds and into the vineyards. Roger is just the best at articulating their history, where they currently are, and where they’re collectively headed. And, bulk wine isn’t anywhere in their marketing plan; it’s got ultra premium and luxury wines written all over their story.

The best, brightest, and most passionate meet each month at the  Suiusn Valley Grape Growers Association board of directors meetings. If asked, all of them would be pretty quick to tell you that Roger articulates the heart, soul, and vision of their business plan. The grape growers all allow him to not only be their lead spokesperson, but they also allow him to guide their future through what Suisun Valley needs to be. He understands the global market, and he’s off and running with their story in hand, when asked what they’re all about. He’d also prefer to not be known in the way I’m writing about him, but there’s simply no way around it. It is what it is… He’s  a marketing machine that ultimately comes from the outside. This makes him more objective in the long run, and not willing to bend to “this is the way it’s always been.” Now, the story is, “This is the way it needs to be, or this entire bucolic valley will quickly turn into a tract home neighborhood.” Gone will be the flora and fauna, like so many other natural areas in California, but the farmers collectively are beating the odds.

Consequently, if there’s a writer coming into that valley, Roger – as well as many others that I  gather – is on the list of who anyone has to meet. You’ll get the guts from Roger, and the glory from all the others. Together it’s a total yin-yang package.

When Ben Weinberg asked me what story I’d like him to know about, I told him that he had to learn about Suisun – for all the reasons I already knew. As he stepped from his car to come meet me in person, he had just come from Napa Valley the back way… This is done by taking the Silverado Trail out of Napa heading south, which brings you to Monticello, and then onto the Wooden Valley Road. This is a typical extraordinary ride through wine country. “Typical extraordinary” might seem like an oxymoron; but, it’s not when you’ve come to see as much of California as I have; i.e., from San Diego’s Mission to John Alger’s  Mountain Shasta area (Alger Vineyards in Manton), the most northern part of the California’s grape growing regions.

California’s landscape is spectacular… from the Pacific coastline, to the Sierra Mountains, to the high desert. 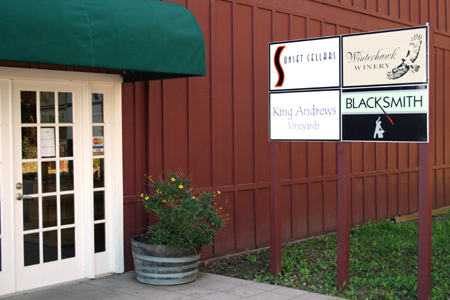 So, writer Ben Weinberg (Rocky Mountain News, Sommelier Journal, etc.) and his partner Tim Heaton (Wine Strategies) took the scenic root and arrived exactly on time at the Suisun Valley Wine Cooperative, to begin our afternoon tour. As we approached each other, Ben held out both arms exclaiming, “Who knew!”

Dead on with his assessment.

It’s a day trip into what California was before all the gold diggers arrived. It’s pure and simple. It’s a breath of fresh air. And, it’s still got gold in them thar hills (metaphorically speaking), with lots of kind and gentle people worth visiting to taste their current success – at the best possible prices  that any AVA still offers its fans.

WORD TO THE WISE: If you haven’t taken shorthand, you won’t be able to keep up with Roger in longhand. Bring a tape recorder. This story is swift in its details and rich in its history.