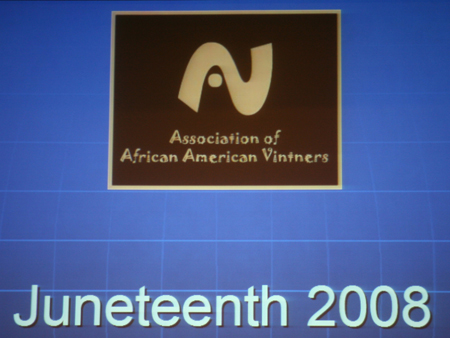 In 2001, I read a snippet in Wine Spectator about the Brown family in Napa Valley owning a winery called Brown Estate.

I was so excited to learn that African American vintners existed in the wine business that I became inspired. This is how writers write. We either dream up a fictitious tale to create, or become inspired by something that exists. That seed begins to grow into a sentence, which becomes strung into a paragraph, that evolves into a story. 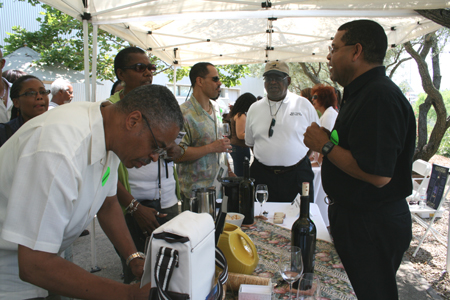 Working in the wine business, and traveling around the US to wine festivals, I noticed that there were very few people of color attending festivals. It just didn’t seem that “American,” yet. I wanted to get to the bottom of what was going on, so I pursued the story. I learned that within the business there was an African American neurosurgeon, Dr. Ernest A. Bates of American Shared Hospital Services. 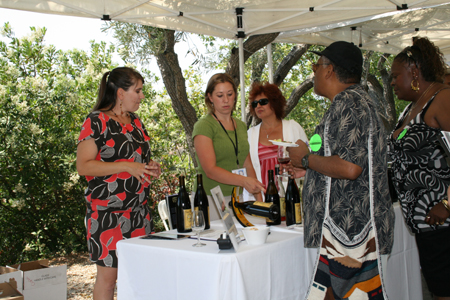 I contacted him, explained that I was writing a story, and asked if we could meet. We chose to meet at Brix’s Restaurant for dinner. While in Brix’s restaurant store, my husband Jose discovered a bottle of Vision Cellars Pinot Noir. The label was the draw – an African mask. Flipping over the bottle, Jose discovered their history… another African American Vintner. [Pictured above is the Vision Cellars team, including Mac’s wife, Lil – center of photo.]

Also, during dinner, Dr. Bates mentioned that he knew of a grape grower in Calistoga, Dr. Marvin Poston of Poston Crest Vineyards. One lead led to another, and I eventually wrote The Changing Face of the American Wine Industry ~ For Every Macrocosm, There Is a Microcosm, published by Wine Business Monthly. 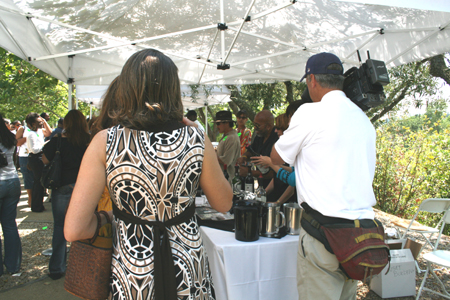 As a writer and a marketer, I’m always thinking… I excitedly called Ernie one day to ask if he thought an association of African American Vintners would be worth presenting to the wine companies within my story (Brown Estate, Bates Creek ~ which has morphed into Black Coyote of today, Poston Crest Cellars, Vision Cellars, Rideau Vineyards, and Esterlina Vineyards and Winery). Ernie gave me his blessings, so I threw it at the others. The next “quick to innovate” was Mac McDonald, who thought it was a good idea, and at that time told me about Sharp Cellars in the town of Sonoma. [Vance Sharp is center in the above image.]

The list with which I was working was growing.

BOTTOM LINE: The seed was planted, and the Association of African American Vintners was born.

Their next big move was to hold an annual event, and Copia became the natural location for this one, with Dr. Bates as a member of both boards of directors (easy marriage). The group recognized the tremendous significance that this venue would play: ingrained credibility, high visibility, and a great central location to the San Francisco Bay Area.

The day of annual celebration which was chosen also has great significance: Juneteenth.

According to the Cinnamon Hearts Website page for Junteenth (their spelling, not mine):

“On June 19, 1865, Major General Gordon Granger stood on the balcony of Ashton Villa in Galveston, Texas, and read a special order from President Abraham Lincoln:

“‘The people of Texas are informed that in accordance with a proclamation from the Executive of the United States all slaves are free. This involves an absolute equality of rights and rights of property between former masters and slaves, and the connection heretofore existing between them becomes that between employer and free laborer. The freedmen are advised to remain at their present homes and work for wages. They are informed that they will not be allowed to collect at military posts, and they will not be supported in idleness, either there or elsewhere.’
“Instantly, June 19, or Juneteenth for short, became a day of celebration and family reunions in Texas.” 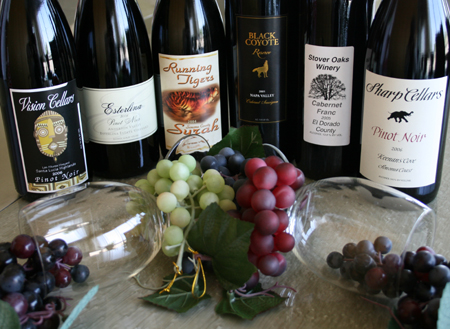 As I photographed this event, I can’t even begin to tell you the range of emotions that I held within my heart. To see what the potential of that tiny seed of thought was growing into: i.e., a marketing group that is bringing attention to a group of vintners who are breaking into a business, whose prior history was filled with so many other ethnic groups (Italians, Germans, French, Irish, etc.), but had yet segued over to the African Americans community… And here it was; not just winemakers and growers, but also their guests who are also are in love with the wine world culture. 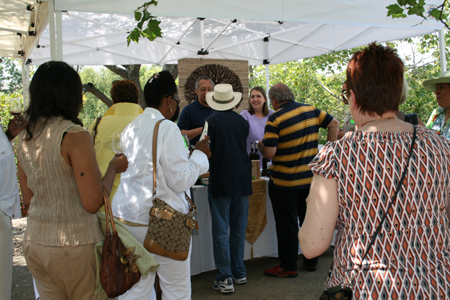 That was something I quickly came to learn, while working with the group. Demand far outstripped the current demand and supply of this elite group. 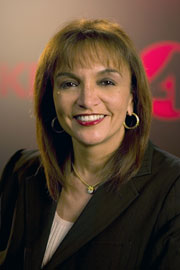 It’s truly remarkable to witness the growth from my “planting a seed.” (Thanks Pam Moore of KRON 4 News of San Francisco for coming up with that metaphor.)

AAAV is blossoming into a self-sufficient group, finding its way as prominent winegrape growers, winemakers, and wine marketers. It’s just remarkable and so rewarding to know that I had a part in their early germination… So early, as a matter of fact, that I created the logo, and now see that image as a significant part of who they are. It’s so satisfying.

SIDEBAR: When living in Maine, I instituted two scholarships a year from my Portland, Maine Rotary Club to the English as a Second Language Program at the University of South Maine campus for immigrants and refugees, because Portland, Maine is a point of entry. AAAV wasn’t the first time I wanted to help advance equality to being more socially equitable, and quite possibly won’t be my last effort. It just is what it is. 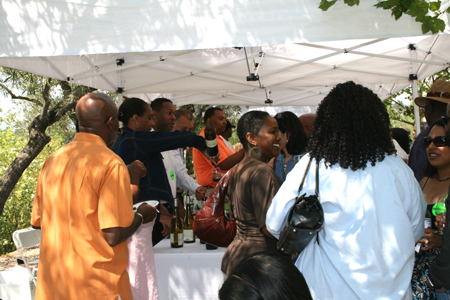 On that sunny Napa day, not only were the vintners enthusiastically talking about their own stories and pouring their hand crafted wines, but the group of people who had come to hear them and taste their wines was also a sight to behold. It truly was a worthy Juneteenth celebration, 143 years later.

It’s an extraordinary time in American viticultural history. It’s a viticultural tipping point for the furthering of equality in America for all races. This entry of African Americans into the wine business is proving that the American Dream can truly be had by anyone, with a lot of hard work and determination…

Panel discussions were followed by the wines being tasted. 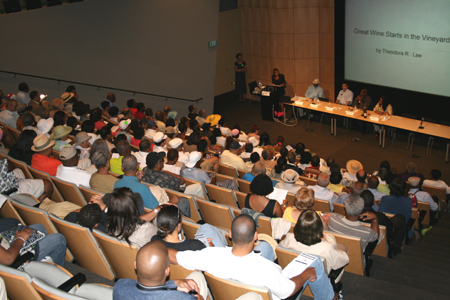 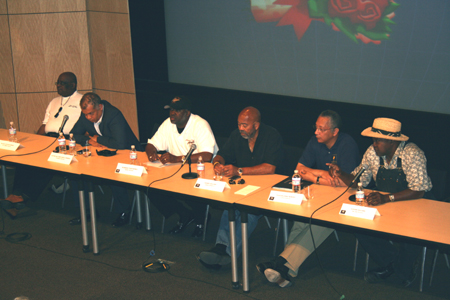