When I first started working with Big House wines, it was my second time experiencing a wine company that had changed ownership… Each has presented its own set of circumstances, and each is worth sharing as a marketing success story.

My first such experience was with Concannon Vineyard. Concannon had gone through many incarnations, but the one constant throughout this process was that Jim Concannon remained on the property being very involved. Having a namesake ambassador is a huge plus, because the general public only needs to see someone like Jim on site to know that things are still consistent with what they originally knew and loved about the brand. With new owners in 2002 – after several prior attempts to reinvent – their thinking was to take it back to the original family and honoring those roots. That was the tipping point for Concannon’s positive imaging called, “Roots, Rocks, and Intrigue,” in order to become endeared by everyone again.

With a lot of communications that first year, publicity for this brand began anew.

With Big House wines being sold, the process for suspicion of wine quality by wine writers began. “How could anything that Randall Grahm created continue to be eclectic, especially since it had been purchased by a large wine company?” asked some media.

“Surely everything was going to go to hell in a hand basket,” murmured the most doubtful behind closed doors.

When wine samples arrived (proof is in the bottle, after all), some samples were disregarded, others were discarded.

There were writers who thought, ” There’s no sense even trying it.” “With all the other brands that have been traded and become homogenized, this surely had to also be the case for Big House,” incorrectly thought they.

A simple “Open the Bottle” policy would have helped the cause, but wine media are bombarded with hundreds of requests weekly, so those nay-sayers were going to leave it to others to decide for them. They’d come back in time, if others would take that initial plunge for them discovering and reporting on positive results. Samples were even resent to all the writers after the first swing at bat, because reactions weren’t forthcoming. This is very costly for any wine company, and one of the challenges that is going to be faced, when it’s not changing from one winemaking icon to another… Say, from Randall Grahm to Sean Thackery. There isn’t a wine writer worth his or her salt that wouldn’t open that one before the wine shipper even hits the floor. 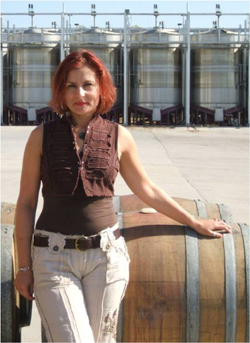 Underdog Wine wasn’t going to let their purchase flop, however. With their vineyard sources in tact, the first thing they did was find the best talent possible to craft their wines, and her name is Georgetta Dane. With a degree in food science, Georgetta went about her business as what she best describes as a “perfumist.”

Georgetta works with the essence of Mediterranean winegrape aromatics, creating her wines accordingly. The end result are wines of unique characteristics and flavors… continuing in Randall’s footsteps as an esoteric winemaker for wines that delight the senses in all ways. The fact that she came in as an unknown is a bit of a challenge. Writers will take the time to meet with most legends coming to town, if they’ve got a clear calendar and lots of lead time. They’re not in the habit, however, of helping to build someone’s career, most especially if they’ve already built their own cache.

They might not enjoy reading this; but, there’s a simple explanation. They’re bombarded with worldwide opportunities every day. It has been said by more than one writer to me, “I could meet, greet, and eat with someone every single night of the year, if I so choose.” They don’t, though, because they need to meet, greet, eat, and digest it all. This way, they can then write something worth reading by their audience.

The deeper they get in the process, the less likely they are to meet someone brand-spanking new. In other words, the more that’s been already written, the easier it is to learn – through all external resources and from their own internal, collective experiences – about the “said” person. It’s very difficult to begin to write what no one else has already written. It’s very time consuming, and doesn’t serve to easily meet impending deadlines, which is always an issue. Plus… their audience hungers for the “star” factor as well.

If I say, “Paris Hilton,” I’ve immediately got your attention. If I say, “Peter Clarke,” you say “Who?” – if you say anything at all. (Petrolitis, who knew?)

So, after getting out the initial message, how can Big House continue with it’s unique marketing style? 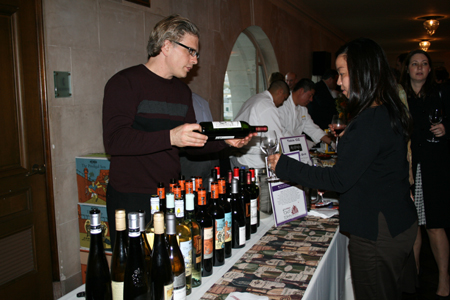 The next step… Having someone to work with the brand who was in on the original think tank process. In walks Nicolas Tucker… [Above on the left.] Nick’s now part of Big House’s brainchild team as part of their marketing strategy. He worked with Randall, and understands it’s heart and soul, as well as it’s historical development.

With this final layer of team building, Big House wines are now poised to guarantee an integrated marketing communications strategy. This wine company, for all intents and purposes, has successfully changed hands. The commitment of Fritz Lance, the president of parent company Underdog Wine Merchants, and his team are passionately dedicated to doing all things… well… in an “edgy” way, which includes being on the cutting edge as a complete strategy.

This one is the one to watch for “How to do it right, the first time.”