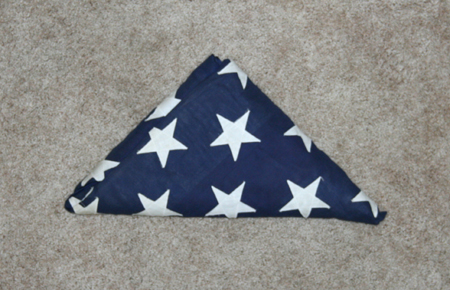 It’s 6:00 a.m., and the usual droning sounds of the busy freeway, just a mile away from here, have become the much anticipated and appreciated holiday silence.

These quiet moments are treasured more than any words could possibly describe, and I’m thankful that they occasionally exist. They remind me of living in the Maine Woods on Sabattus Lake (in the summers of my youth) and Allen Pond (while raising my own children).

Today’s silence is marked by flags from “the land of the free, and home of the brave,” standing still in the silence of a breezeless, overcast morning.

A few flags, like mine, are still kept in their folded, molded shapes, representing a life that’s now gone by and put into someone’s closet for safe keeping… [Like anyone would actually steal this family treasure upon entering a home. I’m thinking it could be on a dining room table in plain sight, and would be left untouched right where it is, while all else would be stolen from any would-be intruders.]

I once tried to give away Uncle Bill’s memento of all he had done in life, to a friend whose husband’s flag – which she flew on a pole in her front yard – was stolen. I thought, “I have Uncle Bill’s memories, why keep his flag?” So, I gave it to her in a moment of magnanimity and (perhaps?) closure.

She kept the flag for only a week, and brought it right back to me saying, “There’s something really eerie about this flag.” So, I tucked it away, again.

“Can’t put closure on a heart,” thought I.

I brought it out this morning, so I could photograph it, then laid it on a table in my living room. I’ll keep it there for the day, as I experience Memorial Day in Wine Country.

I’m hoping that everyone that comes to wine country today will raise his or her glass in memory of someone that means something to him or her… Otherwise, why do we have this day off?

I was just struck by something that Andy Rooney of 60 Minutes said the other night, “Our soldiers don’t ‘give’ their lives, they’re ‘taken’ away.” Andy’s not going to celebrate Memorial Day until someone’s found something worth celebrating… like finding a way to co-exist in peace. 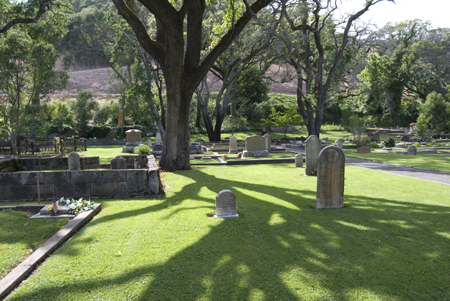 This image was taken yesterday in Suisun Valley at the Rockville Cemetery. I was with my husband, who was looking for a shot he could take to put up on his own blog (www.josephotos.com) that would represent Memorial day for him.

Instead of the flag images he took, here’s one I took of eternal peace, with the shadows of the past and the light of the future working together.

Today, I’m going to have a moment of silence for my own family members who may not have given their lives in battle, but they did give their sanity a good run for its money – all surviving with post war distress from participation in the “War of the Times.” I know, having lived so long with my dad that survival was, in some ways, worse than death itself (post-traumatic stress disorder).

James Clark (Great grandfather, 5 times removed), born in Kittery Maine between brothers Elisha Clark (about 1732) and Ebenezer Clark (1744). He was known as “Uncle Jimmy.” He served nine months with the Continental Army, and was taken from a vessel and held a prisoner for three years when his daughter Patience was a baby. (One source stated he died 1778/9 in a British prison in Hailfax, Nova Scotia, which is wrong because he had children after then.) He is buried in Lincoln Cemetery, and there is a Revolutionary War flag holder at his grave, where there is a small foot stone with J.C. on it.

Harold Emerson Clarke (great uncle with no children), born May 7, 1890, Nobleboro, Maine, died June 5, 1946. Resided in Nobleboro, Maine. He was an inventor and was honored in World War II for inventing the foot measurer for U.S. Army. This device was used to process soldiers more expediently, at a point in history when time was of the essence. 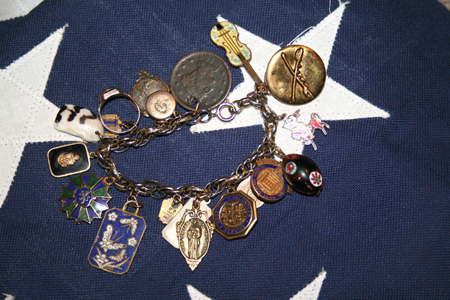 David Emerson Clarke (father), born September 24, 1922, Waterville, Maine, died April 21, 1990. Served in World War II. Entered the war on the Beaches of Normandy. He was to lead a motorcycle brigade as an officer, having left Norwich University when the war broke out. My father was given the choice of joining with a commission, or being drafted as a Private. He gave up pre-med and joined the war.

William Clarke (middle brother, with my father being the youngest of three, which is why I hold his flag and his spirit.)