All Hail to Veterans

Jack Heeger of the Napa Valley Register just reminded me of why I’ve often referred to myself as The Impatient Publicist©.

One of processes the led to The Impatient Publicist being created inside of me is the following; and, this is what a client had to go through, in terms of waiting for his or her story to be printed:

When a good intentioned editor states that the best way to get a writer’s attention is to give the writer an exclusive, that’s a pretty tall order. I say that because I have a data base of thousand upon thousands of writers in the US. To put all of a client’s eggs in one basket means that that client must have the patience of Jobe… And very deep pockets to play out this kind of thinking.

Not to mention that a publicist will soon go out of business, only to become another one of those thousand upon thousands of writers looking for placements of stories in magazines and newspapers all around the globe. (Okay… I did mention it.)

Consequently, when a story’s pitched to the throngs, trust me… there’s still going to only be one person who will claim it as his or her own, sans exclusivity. It’s something within the story that sparks the juices of the writer (collective history), and the rest gets written as if it were an exclusive… because that’s what it becomes.

So, here we are, back with Jack… and his involvement. U.S Army Sergeant First Class Cheryl Dupris contacted me, because she was returning from Afghanistan and only wanted to taste Petite Sirah, so she enlisted the help of PS I Love You. I went to the membership with her request, and they in turn gave Cheryl a 10-day, all expenses paid extravaganza in wine country, the likes of which no-one ever had received from the wine business, and nothing I can do again any time soon. It was a one-of-a-kind… Period. (Search on “Dupris” on this blog. You’ll find almost all of the details. I still have to write the Teldeschi, Markham, and Moss Creek stories.)

Cheryl took her stay with us a step further by inviting everyone who helped her to be on a Veteran’s Day float. When she returned to New York City, her V.A. group elected her to be their post commander. She organized US Army Generals to get onto this float with the vintners who honored her, and Leo Trentadue of Trentadue Winery (as a World War II Veteran) took her up on her offer. He flew his family to New York to be on this float devoted to Instant Ready Reservists, for which Cheryl is one.

Jack, also a Veteran, was so inspired that he followed the story to New York, also finding himself on the float with Leo and a handsome group of Generals. According to Jack, there was the Parade’s Grand Marshal, the Mayor’s float was next, and then the Sergeant First Class Cheryl Dupris float, with the rest of the parade following them. It was first class, New York style! 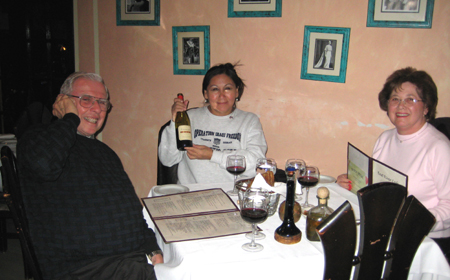 I received a call on Sunday evening from Cheryl and Jack, while they were dining out, enjoying Foppiano Petite Sirah… The energy and excitement in their voices spoke volumes about what had just happened. Cheryl had wined and dined them on 5th Avenue… The likes of which none of them could have ever imagined… Staying at the Marriott Marquis in Times Square. I know the place well… When Jose and I were in radio, we attended the New Music Seminars… James Brown walked in from the revolving door, as I was about to walk out… We caught each other’s eye, he realizing that I recognized him. He smiles and grunted his famous… “Huh…” Ships passing in the night. New York City is the stuff not only dreams are made of, but memories are firmly implanted in one’s collective consciousness.

And, as Jack just said to me, “And, to think it all stared with “info@psiloveyou.org.”

All hail to Veterans! They know how to live!