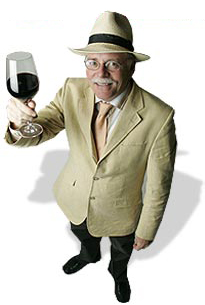 I just adore writers who state the truth – flat out, and was just reminded of this when I read Jerry Shriver’s article in USA Today, Soak in the pleasure of wine, spirits with a few good books.

Jerry wrote, “I won’t flamboozle you with the fiction that I have actually finished any of the more than 20 new wine and spirits books that have landed on my desk this fall. I find it difficult to drink and read at the same time, and you know which takes priority.”

This is what I find so endearing about Jerry… He reminds me of another person who falls into the same “He’s so dear” category… Andy Rooney.

It’s the charm of their pure honesty. Neither person is trying to be anyone else, and neither is trying to pull the wool over anyone’s eyes. They just deliver stream of consciousness.

My working partnership with Jerry really took off through the PS I Love You group that I started with Lou Foppiano. I once heard that the power of any message is power squared; i.e., if you’re just one person, it’s the power of one; if you’re a group of 60 people, it’s 60 times 60 = the power of 3,600.

Dr. James Wolpert of UC Davis stated at one of Foppiano’s Petite Sirah Symposiums, “I’ve never seen a project like the PS Heritage Clone Vineyard take off so fast. This has never happened with any other variety before.” Well, I knew the reason, because I believe in the power of mass messaging, squared et al.

So… back to Jerry Shriver…

When I approached him to do a focused story on Petite Sirah a few years ago, he agreed. The power of his message cannot be underscored… largest circulation daily paper in the US. His audience is world-wide, and yet he remains so humble and personable in every conversation.

He’s a credit to promoting wine, and greatly appreciated by everyone who loves to read his honest and forthright opinions.

He’s also jumped into the blogosphere and started “Cheers: Today’s Bargain Wine buys.” Jerry’s focus is in finding good, affordable wines, with good production volume of a minimum of about 10,000 available cases.