Since writers are busy writing, and this includes me, I’m going to review my files on wine writers to make sure they’re relevant. This one on Dan Berger is pretty informative. 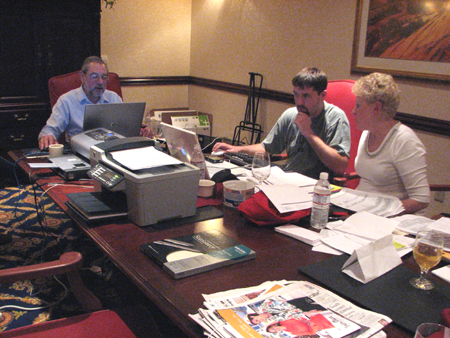 I have to thank Dan Berger and his wife Juliann Savage, who – wanting to expand my knowledge base – invited Jose and me to attend his Riverside International Wine Competition this past May. It was an eye-opener; not only regarding what a competition was all about as it was happening, but also regarding the man and woman who so generously hosted us. Jose had worked on a team with Dan’s son Mark Berger. Together they took the wine competition to an on-line order form… and off we all went. What follows is a profile of the man behind the Vintage Experience, and his life’s work devoted to being an honorable scribe.

Dan Berger began writing about wine in 1976 and today his column is syndicated nationally by Creators Syndicate to newspapers around the world. He and his wife, Juliann Savage, also publish a weekly wine newsletter, Dan Berger’s Vintage Experiences, available only by subscription.

He also contributes articles to Decanter Magazine in London, Winepros, an international web site on wine, and he writes restaurant reviews. He is also the regular monthly wine columnist for The Underground Wine Journal, contributes regular wine essays for the California Grapevine, and is a regular contributor to Appellation America’s Web site.

Mr. Berger’s first wine articles were for The Associated Press, where he worked as a general assignment and sports reporter. His first regular wine column appeared in 1977 in the Los Angeles Herald-Examiner.

In 1979 he joined the staff of the San Diego Union, where his wine columns ran twice a week and were syndicated nationally by Copley News Service. He also reviewed restaurants for San Diego Home/Garden Magazine for six years.

In 1986, Mr. Berger moved to Sonoma County where he became Business Editor and wine columnist for the Santa Rosa Press Democrat. The New York Times Syndicate carried his wine column nationally in 1987. In 1988, Berger joined the staff of the Los Angeles Times as full-time wine columnist and reporter. The Los Angeles Times-Washington Post wire carried his column nationally. Berger left the Times in 1996 to publish Dan Berger’s Vintage Experiences, a weekly newsletter on wine and food.

Among the honors presented to Mr. Berger are the Wines and Vines Magazine award of excellence as Wine Writer of the Year (1988); the Father Junipero Serra Award for contributions to the wine industry, presented by the California Wine Patrons of Los Angeles (1989); the Wine Literary Award, presented by the Wine Appreciation Guild (1993), and he has been an honoree of the Central Coast Wine Association.

A speaker at wine symposiums on topics such as wine marketing and public relations, he is also a judge at many wine competitions including the New World International, San Francisco Fair, California State Fair, Los Angeles County Fair, West Coast, the International Wine Competition at Lubljiana, Yugoslavia; Concours Mondial in Brussels, and at seven wine shows in Australia.

PS: There is no one who deserves a P.S. more than Dan… He’s the person who said to me, “There needs to be an advocacy group devoted to Petite Sirah, and it should be called PS I Love You!” (The rest is history on that idea…)