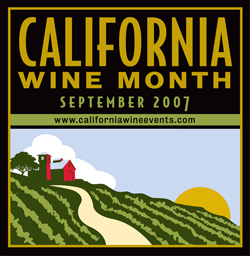 Governor Arnold Schwarzenegger has declared September 2007 California Wine Month, in a proclamation praising California’s wine community for strengthening the state’s economy and highlighting the ideal climate, beautiful scenery, geographic diversity, and unparalleled expertise of its grape growers and vintners. This is the third consecutive year that Governor Schwarzenegger has honored the state’s wine industry.

While one might think that this is “no big Deal,” consider the following: 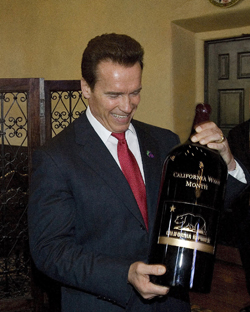 The Wine Institute, the association of 1000 California wineries and affiliated businesses, initiated the California Wine Month campaign in September, during the annual harvest, to showcase the state’s more than 20 distinctive wine growing regions and 107 different, designated American Viticultural Areas (AVAs) recognized by the federal government.

Robert P. (Bobby) Koch, President and CEO of the Wine Institute stated, “We’re pleased that the contributions of California’s vintners and winegrape growers are recognized by the Governor as a unique and special part of California, because California is a spectacular place to grow and make wine, and we’re considered by many to be the world leader in sustainable winegrowing practices.”

The Wine Institute is partnering with winery members, regional wineries, grower associations, retailers, restaurants, and other organizations with a calendar of California wine events in September.

To keep abreast of activities surrounding this month’s focus, visit www.californiawineevents.com for listings of things to do in California wine country, not only for September, but also for event that are ongoing throughout the year.

For more information, or to become involved, you can contact the following: