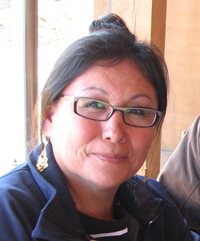 When Sergeant First Class Cheryl Dupris (aka Honey Airborne) contacted me from Iraq on February 25, asking me where she could taste only Petite Sirah in California, little did anyone know that this would turn into a huge “Make a Wish” event. The last time PS I Love You did something on this scale was right after Hurricane Katrina, when I gathered members’ Petite Sirahs, and had them shipped to a wine auction benefiting victims of Katrina. (This is just not something that we’re set up to do all of the time. It has to be a very unique circumstance to have that kind of energy turned on full throttle.) 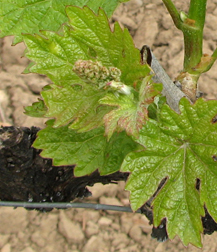 Cheryl’s Petite journey turned into a rendezvous where PS members have opened their hearts and companies. Also, many peripheral companies (hotels, inns, restaurants, hot air balloon company, etc.) felt the need to give back to Cheryl for her selfless military service, and couldn’t wait to give back to our armed forces through Cheryl.

As a member of a special unit of the Armed Forces, SFC Dupris has been deployed since 9/11, in Iraq, Afghanistan, and Hurricane Katrina.

In five weeks, I was able to create an Active Duty Tour of Petite Sirah for SFC Dupris, so she could be wined and dined in style… (Trust me, nobody does it better than wine country.) This meant that Cheryl couldn’t possibly imagine what was about to happen on her behalf. She’s had 10 days arranged for her in complete VIP style, because she’s dedicated her life to selfless duty in the name of our freedom! The wine industry has embraced Cheryl, in order to show not only our appreciation, but also recognition that we know our soldiers are honoring their commitment… regardless of world war politics. 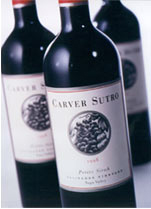 Tuesday, April 3, 2007: Cheryl arrived and was scheduled to meet with Denis Sutro of Carver Sutro in Napa at 1:00 p.m. Not having driven California roadways for a long time, she understandably got lost along the way. By the time we got anywhere close to each other, she was returning from I-80, and it was 2:00 p.m. We had to miss Denis Sutro and his gorgeous Petite. Unfortunately for us, he had just opened a 2002 Carver Sutro Petite Sirah on Cheryl’s behalf… and we just had to adapt… (It was NOT an easy thing to do, as anyone who knows Denis’s wine can imagine.)

We finally connected in Napa, and off we went to Ballentine Vineyards. Marion Johnson greeted us, and sent for winemaker Bruce Devlin. Cheryl’s first Petite in Napa Valley was their 2004 Petite Sirah Field Blend. Ballentine has one of the few head trained vineyards remaining in Napa Valley. They’ve identified the varieties as being primarily Petite Sirah, but also has Zin, Syrah, and Carignane vines. The 2004 harvest yielded over 2-tons to the acres, and the wine has great intensity that just exploded on my palate. Not a bad way to start the pilgrimage, thought I. Also this is a pilgrimage that’s just going into, is part of, and will be followed by the Easter/Passover season… Is there a better time? Next, Bruce poured his just bottled 2005 Petite Sirah Field Blend, which he opened on our behalf, as it’s not near ready to be released for tasting or sale. Being just bottled, I was still able to see the promise of a bright future. 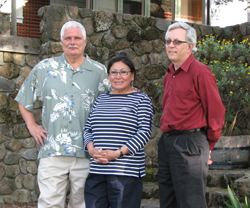 After Ballentine, we met up with my daughter and future son-in-law, Lyla and Hasan. The four of us journeyed up the Napa hills to Girard Winery, where vintner Pat Roney and estate manager Steve Ross met us. Not only did we get to taste a full range of Girard wines (which ended with their Petite), but Pat was hosting Cheryl, Lyla, and Hasan for an over-night visit, as the next morning Balloons Above the Valley was going to be taking them on a flight. The Girard 2005 Petite Sirah, Napa Valley is a powerfully structured wine, but supple enough to be very enjoyable right now. 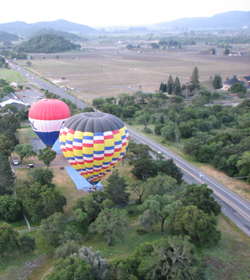 Balloons Above the Valley

Wednesday, April 4, 2007: Cindy Barbarick of Balloons Above The Valley generously arranged for Cheryl to take flight, first thing in the morning. I arranged for Lyla and Hasan to join Cheryl, so she’d be in good company, and we’d have images for you. Cheryl is a former member of the 82nd Airborne Division, so taking flight isn’t new to her. Having a champagne brunch upon landing… Not really something that’s she’s ever experienced in the Airborne… Wine country’s a trip and a half!

At 10:30 a.m. the balloonists headed over to Stags’ Leap Winery, where they were met by Ken Swanson for an amazing tasting of Petite Sirahs. I wasn’t at this tasting, so I don’t have all the details, except that they were given three Petite Sirahs to taste, and found the expereince to be “magical”… Not having yet been there, my pilgrims reported back that Stags’ Leap Winery is a very special winery to visit. (Now I feel over-due to get myself there!)

Thursday, April 5, 2007: This day was going to be dedicated to Livermore Valley. Not only were we going to the newest winery being constructed that would house Petite Sirah, but we were also going to one of the oldest wineries that has Petite Sirah as their flagship wine. 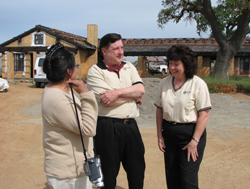 First, we visited with Carl and Cherie Lyle of Deer Ridge Vineyards. This was a very special moment for us all. Carl, who’s the proprietor & winemaker, told Cheryl and I that we were his very first visitors (ever), because he’s still under construction. 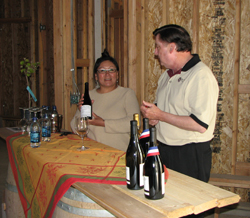 He also set up what served as a great tasting bar: a rustic plank with two barrels on either side for support, and was draped with a lovely winecountry-motif table cloth. Carl and Cherie were so hospitable. We toured his gravity flow winery, tasting his very first vintage, a 2005 Deer Ridge Vineyards Petite Sirah. This historic property dates back to the very location where grapes were grown 180 years ago. In 1882, this became the Old Wetmore Ranch, established by Charles A. Wetmore. This was Livermore Valley’s winery at that time, called Cresta Blanca Winery. Carl and Cherie feel a deep sense of pride, returning this property back to its winery roots. 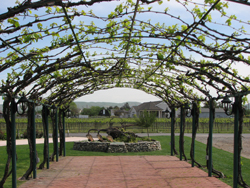 From Deer Ridge Vineyards, we traveled over to another very old property in Livermore Valley, Concannon Vineyard. Concannon was established in 1883, and has had a Concannon family member on the property ever since. Jim Concannon (grandson to founder James Concannon) met us for lunch under the vine-covered arbor. 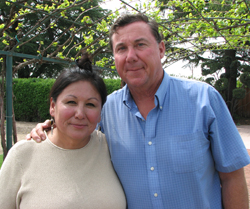 It was a beautiful spring day. We couldn’t have asked for a more perfect day for everyone’s first outside picnic in 2007. Direct sales manager Jim Ryan set before us a feast that still remains “unimaginable,” quoting Cheryl. Returning from Afghanistan military service, this was a bounty that absolutely amazed Sergeant First Class Cheryl Dupris. 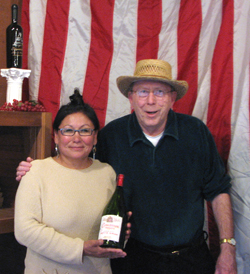 At Concannon, we began our lunch with their 2005 Reserve Sauvignon Blanc Monterey County, segueing into Concannon’s 2003 Reserve Petite Sirah Livermore Valley. Cheryl was then taken on tour with Jim Concannon, which ended in their tasting room, where Cheryl had to have “Just one more taste of that Petite Sirah!”

This is where I’m going to stop the journey, although I have yesterday (Friday) to explain… That’s going to come tomorrow, when I have renewed energy. It’s a long story, and I want to start that one with fresh energy… Mañana