Concannon ~ The First One Hundred and Twenty Five Years 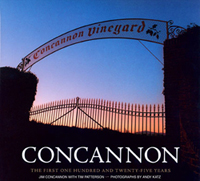 This is a gorgeous coffee table book! It was written by wine industry historian Tim Patterson, as told to him by one of our preeminent wine icons Jim Concannon. This is, without-a-doubt, an amazing book.

Not only because it’s told through the voice and memories of Jim Concannon, but also because it’s seen through the lens of Andy Katz… another wine industry “best of the best.” Andy’s photography is known worldwide as expressively visual… He’s a master with a lens.

Taking all of these significant ingredients, and putting them on the same path for a couple of years, equals a book of major proportion… And that’s a pun. I had to measure the book, because it’s big one. Coffee table in size (12.25” x 12.25”). This is one that would make Seinfeld’s Kramer proud! (Remember that funny episode?)

Beyond physical size, there’s information contained within that’s also of major proportion. Tim Patterson did his home work, and has brought forth into print (finally) what Concannon and Livermore Valley have given to the wine business. Trust me, it’s not something that Napaites want to hear, either. I had to provide the studies of Dr. Deborah Golino and Dr. James Wolpert (both of UC Davis) to one of Napa’s greatest winemakers, when I told him about Clones 7 and 8 belonging to Concannon, as he just couldn’t believe it. Who in Napa wants to know that Napa’s been planted to anything but Napa born and bred? I learned through my source that that’s a tough reality, purism et al.

Truth is, Concannon on one side of Tesla Road provided UC Davis with Cab clones (7, 8, and 10), and Wente on the other side of Tesla Road provided the California wine industry with its Chardonnay Clone. The Wente Clone isn’t known by number, it’s known by name… It’s just “the Wente Clone.” Concannon’s, on the other hand, has only been known by number… with Clone 7 being considered “the most popular,” as described by John Caldwell in his self-published “A Concise Guide to Wine Grape Clones For Professionals.”

So, Concannon ~ The First One Hundred and Twenty Five Years captures so much. According to Karen MacNeil, this is a “fabulous book that contains important California wine history.” Patrick Fegan (Chicago Wine School) has declared this a “great book for reading slowly, one-day-at-a-time, as Jim’s stories are captivating, and each one gives you time to pause and enjoy. This is a coffee table book in all senses of the word.

The story grabs you, the images tell a ‘thousand words.” (For instance, I’ve photographed harvest, and always wondered how – in an image – I could possibly capture the Wiley Coyote & Road Runner speed of grape harvesters. And there it was! Slow shutter speed. Thanks, Andy!)

Give it as a gift this holiday season, but not before you enjoy it yourself. You’ll also want your own copy, I’m betting!

It’s a treasure for all wine libraries, but I doubt that it will leave the coffee table any time soon!