Santa Fe ~ A most natural place for food, art, and wine to merge 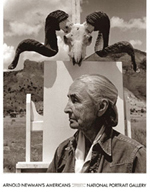 With over 150 art galleries in and around this tiny town, an enormous array of art work by local, regional, national, and international artists, photographers, and crafts people is on display in Santa Fe, New Mexico…

Most noted among them is Georgia O’Keeffe, who’s best known for her spectacular floral and desert inspired scenes. The Georgia O’Keeffe Gallery is a “must do” for anyone who loves her images. The city’s Web site proclaims itself as America’s third largest art market. You can’t argue that with me, as I believe it’s true.

The most important historical ingredient of this town is its Native American history, which is extensively pervasive and evident by simple osmosis. A finely tuned spirit immediately feels its enchanted energy.

A turn in history to their Pueblo Indian-village lifestyle (which has founding dates between 1050 to 1150) was when conquistador don Francisco Vasques de Coronado invaded Santa Fe. This was in 1540, and was 70 years before the officially proclaimed “founding” of Santa Fe.

Santa Fe is one of those places where food, art, and wine first came together, continuing to this day… Imagine a padre without his daily, ritual wine? It couldn’t happen, as these missionaries were European. (Europeans and wine are synonymous, aren’t they?)

As a result, wine became part of Sante Fe’s heritage long before Napa Valley fell onto that trendy map. The missionaries brought what became known as the “mission” grape when they arrived (much the same way you all travel back from wine country with a few bottles from your favorite visits).

Here the history of food dates back to the beginning of time, but became really famous when Mark Miller staked his claim to a piece of Santa Fe. Now, years later, all of Santa Fe wants to lay claim to this celebrity chef. (Dave Pramuk and I found this out when we were dining elsewhere. The mere mention of is name brought out, “Well, he got his start here in Santa Fe. I’m not sure that’s in Mark’s bio, though). Mark Miller is, without a doubt, one of the most prolific chefs on our planet… His roots are New England, his playground is the world, but his umbilical cord is currently connected to Santa Fe. Dave and I got to visit with him at Coyote Café in our whirlwind tour.

The mission grape is a vitis vinifera varietal, same as all the other European varietals that we enjoy today. This one’s origin is Spain, and we all know how great Spanish wines are…

So, Santa Fe is one of the most natural places in the US to host this annual Food & Wine Chile Fiesta … And, with all the events that I’ve been to in the US, Santa Fe remains one of my all-time favorites.

The following images tell the food side of the story. Enjoy!

This event is always the last weekend in September. See you in 2007! 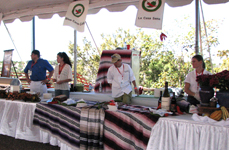 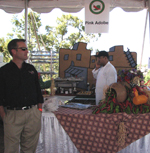 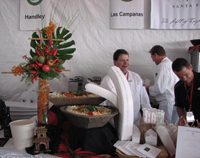 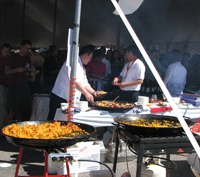 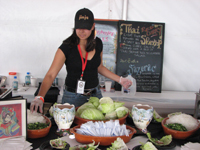 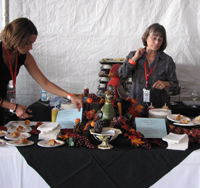