David Bruce: Wining and dining with the legend! 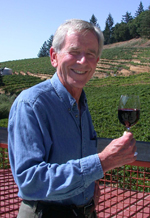 The man is a Pinot Noir legend, but that’s not how we met. It wasn’t because of Pinot; although, I have a deep respect for it. It was because we both have a mutual relationship with Petite Sirah. With the Foppiano family’s blessing, I had founded PS I Love You in 2002, and David Bruce simply joined as soon as it got going. Who knew David is also passionate about Petite?
David Bruce Winery is located at davidbrucewinery.com

As I’ve tasted Petite Sirah from each of the member wineries, I’ve been able to learn the flavor profile of each, with my memory bank storing which Petite belongs to whom. Some memorable impression is made in each case. David’s Petite, from within this PS group, is completely unique, because David Bruce connects the dots from Pinot to Petite. The first time I ever tasted his Petite, I knew it was crafted by a Pinot master. There’s an umbilical cord between the two varietals, if you can image that.

David’s logo is a Scottish coat of arms. Strategically placed in the center of his label, that’s the heart and soul of what he’s all about. History is very significant to all that he does. An extraordinary man, who during the 1960s had an epiphany: David wanted to make the world’s best Pinot Noir. As he tells his story, his first accomplishment was that he became known for Cabernet, not Pinot. Then, he became known for Zinfandel, not Pinot. Next, he became known for Chardonnay, not Pinot. Finally, he became known for Pinot. within the wine business, it’s now broadly recognized that David Bruce Pinot sets a benchmark standard for the varietal as a spectacular experience, not just a glass of wine.

David Bruce’s vineyards sit high in the Santa Cruz Mountains above the cloud line, where he’s made his superlative mark. On Wednesday of this week, we drove up the mountain, and this Scot opened the heart of his library collection to my friends, his winemaker Mitri Faravashi, cellarmaster Victor Paz, and me. We first tasted a 1981 David Bruce Estate Pinot Noir. It still held delicate rose petal flavors, exhibited a Burgundy, brownish bowl and rim. It still held the essence of the wine, and it delighted our senses. Next, we tasted a 1990 David Bruce Estate Pinot Noir. A bit more of the purple red than brownish red, this wine was also marked by flavors of rose hips, and held another layer of black pepper spice. From there, we moved into a 2003 Estate Chardonnay, which clearly demonstrated why David had become known for Chardonnay, back when he did. Succulent flavors of apple and pear fruit, with butterscotch, caramelized apple on the finish. This was a Chardonnay that stood on its own, and wasn’t begging for food to round it out. Then, we moved into the Pinots for a lovely experience, and finished with his Petite Sirah… Aha! The crown in his coat of arms.

For me, this is his crowing glory, because our friend not only wanted to make the world’s best Pinot Noir, but he’s now moved past his goal into true American viticultural history. Along the road to Pinot Noir, David’s also found a path to Petite Sirah. Making just one stellar Pinot may have been David’s original intent, but staying within those limiting confines would have robbed us from all of his exquisite expressions beyond Pinot.

David Bruce offers Pinot Noir from selected vineyard sources from all over California. The winery inter-plays with a recognizable flavor profile of the varietal, along with the expression of the terroir from each vineyard and its owner’s vineyard practices. Has anyone mentioned, when they mention terroir, that a vineyardist is another ingredient to what the fruit expresses as a flavor? Well, we really should consider the viticulturist as a component, because his/her decisions for which clone, which direction the vine should face the sun, which trellis system to use, to irrigate or not, etc. all affect flavor; as well as location of the vineyard, relative air moisture from the environment, soil composition, climatic conditions, etc. This is really evident as you taste through a line of David Bruce’s Pinot Noirs. One man’s dream has stretched out to encompass many people’s aspirations, as each of his Pinots express something unique to its terroir. (Including the vineyardist, remember.)

Although this meeting will be as memorable as Jose’s and my last visit to the winery, the writing of this one still has to also include an ingredient of our last visit, because it ties it all together. I didn’t have a blog back then so I couldn’t journal this for posterity. Now, I’m able to get this out there, as it was just so memorable and worth sharing.

First, it was David’s fortieth anniversary dinner at the winery. There were only a handful of his life-long relational, invited guests. I was so honored to be part of that inner sanctum. It left a huge impression on my heart and soul. It’s something that everyone should have as a winery experience, to understand what a Scot brings to the winery table, making his heritage unique.

As we were all asked to move from the comfort of the reception to his cool wine cellar, we knew that we’d be tasting wines from selected wine barrels; however, we didn’t know that we’d be greeted by a fully dressed, Scottish bagpiper. Like the pied piper he was, he led us into David and Jan Bruce’s cellar with sounds of “Amazing Grace,” and so it was, and continues to be… David Bruce, the man, the legend that we all love.